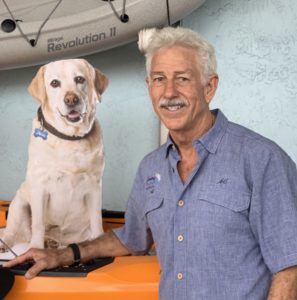 Al Hurxthal has thoroughly enjoyed being part of the Economy Tackle Team for over forty two years. Keen to the evolving trends in recreational paddle sports, Al was the driving force behind the addition of kayaks to the business in 1989.

A water-sports enthusiast, Al has been a competitive sailor, Master’s swimmer and triathlete. Enjoying time away in the mountains of North Carolina, he also enjoys whitewater kayaking and trail bike riding. The Hobie Adventure Island, one of his favorites, allows Al to combine his passions for sailing and kayaking.

Stand up paddle boarding is another way Al loves to be on the water. Paddle boarding and kayaking Glacier Bay Alaska was the most amazing place he’s ever paddled. “The most fun aspect of my job is hearing great paddling stories from customers who have become participants of paddle sports because of our efforts.” 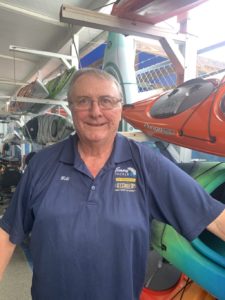 Bill Godek became part of the Dolphin Paddlesports team in June of 2014. Bill has worked in the kayak business for over eight years. He is certified by the American Canoe Association as a Level One Instructor, a Florida Master Naturalist (Coastal Systems) and a Certified Interpretive Guide.

A native of St. Petersburg, Florida, Bill grew up on Pinellas Point and had an early interest in Paddle sports. As a teenager he constructed a kayak from a kit using wood and canvas, which he used in many paddling adventures throughout Florida.

Graduating from the University of Florida in 1978, Bill moved to Alaska where he managed animal shelters for two municipalities. After 27 years he retired and moved back to Florida. Determined to get involved in the kayaking business he worked for Grande Tours Kayak Company of Placida. For over eight years Bill did everything from kayak sales to summer kayak camps. 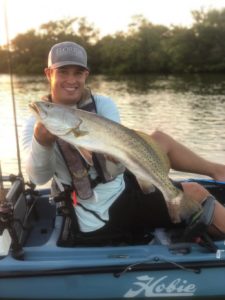 Davis Gurr is an avid Hobie kayak angler, enjoying the challenges of offshore pelagics and inshore tarpon fishing along with other game fish. His kayak of choice is the new Hobie Outback because of its versatility in both areas of pursuit.

As a marketing student at Florida Gulf Coast University, Davis is a member of the universities fishing team participating in fishing tournaments across the state. Davis is proud to be a pro of the Hobie Fishing Team. Got any kayak fishing questions…? Davis is your guy to go to! 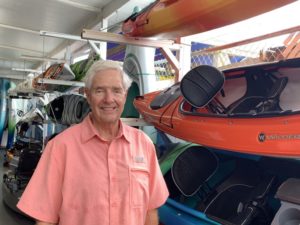 Fletch moved to Sarasota in 1981 from the wine country of northern California.  When asked why?… “the Gulf of Mexico”.  Since then Fletch has sold yachts and sailboats, flew the skies with People Express Airlines and managed a small commuter airline in Athens, Georgia.  After enough commuting, Fletch opened a combination bike shop and coffee shop in 1989.  BikesenJava became the hub for cyclists and athletes in Sarasota.  A competitive cyclist, Fletch won numerous state titles.

During the past 3 decades Fletch has paddled many different kayaks, each with its own personality.  His favorite boats are the 17’ Tsunami, the Pungo, Hurricane Skimmer tandem and Hobie Revolution 16.  Fletch’s need for speed is still with him from his cycling days.  When Fletch feels like checking out the flora and fauna he takes out his Hobie Paddleboard.  Being able to look down into the water is always rewarding.

“We have such a treasure of paddling opportunities here in Sarasota and surrounding areas – so excited to paddle them all!”

Dick Pfaff began whitewater kayaking in 1981 while pursuing a commercial photography degree in Glenwood Springs, Colorado.  While enjoying a very successful and colorful career as a professional photographer in the western United States, Dick eventually found himself living on the Gulf Coast of Florida, adopting Sarasota as his new home.

Dick attended a kayaking demo days event and soon was very involved in coastal kayaking.  He became passionate about kayaking and in 1998,  accepted an offer to work in a part-time kayak position at Economy Tackle/ Dolphin Dive and Kayak.  Dick pursued many classes and certifications and soon the part-time position turned into a full time career.  He now holds a four star British Canoe Union Certification (BCU), the American Canoe Association (ACA) Open Water Certification, and the ACA Traditional Certification.  Over his many years at Dolphin Paddlesports, Dick has become an integral part of the management team, as well as an instructor and tour guide.

Dick sits on the Board of Directors for Friends of Myakka, a non-profit group established to protect, preserve and support Myakka River State Park and the “Florida Wild and Scenic Myakka River”.  He also consults for the Sarasota County Parks & Recreation Kayak & Canoe Guide and provides many of the photos in the publication.

In May 2008, Dick was honored by the Charlotte County Tourism Board when he was presented with their Eco Tourism Award in recognition of his local ecology efforts.

In addition to kayaking and photographing wildlife, Dick has enjoyed building a wooden kayak.  In 2006, his Dancing Loon took first place in the Contemporary Design and Construction category at the Great Florida Gulf Coast Small Craft Festival in Cortez, Florida.  during the April 2009 festival, the Dancing Loon received a second place trophy in the George Luzier Award for Traditional Design: Contemporary Construction. 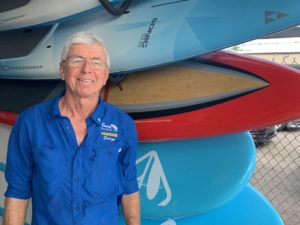 George Kaiser is a Sarasota native who has been paddling and sailing our local waterways for over fifty years. George began his water sports career in 1982 when he and a partner opened Ocean Blvd. Sailboarding in Siesta Village. In 1989 kayaks were added to the inventory creating Sarasota’s first kayak shop.

An ardent paddler, George has made numerous multi-day trips through the Ten Thousand Islands and the Everglades National Park. He also completed a solo paddle by kayak from Sarasota to Key West. Closer to home he enjoys fishing from both his kayak and his paddle board or skimming the Gulf on his surfski.

George has been with our team at Economy Tackle/Dolphin Paddlesports since 1995 and received his certification as an American Canoe Association (ACA) kayaking instructor that same year. 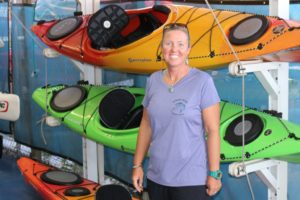 Kelly Lagerholm is from Glen Ellyn, Illinois one of the western suburbs of Chicago. She is a veteran employee having worked ten plus years in the outdoor industry. She worked for ten years as an instructor (ACA certified), guide and operations manager of Kayak Chicago, a tour company specializing in leading customers through the city of Chicago’s “canyon of glass and steel”.

Kelly is an accomplished expedition sea kayaker, having spent many days living out of a kayak while exploring different waterways. Some of the places she has paddled includes the Buffalo River, Apostle Islands and Pictured Rocks in Lake Superior, the Namekagon and St. Croix Rivers as well as the Everglades and Tybee Island. 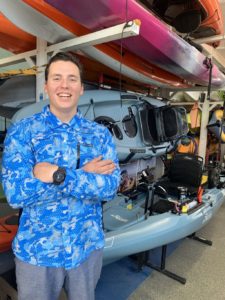 Anthony Rinaldi is an avid Hobie kayak fisherman specializing in artificial lures in both salt and fresh water. Born and raised in Sarasota FL, Anthony has dedicated numerous hours learning his local waters. At the age of 5, Anthony was fishing with his grandfather, who taught him the skills of angling.

During his sophomore year at Sarasota Military Academy, Anthony discovered kayak fishing. It is now an important part of his life. He owns a Hobie Pro Angler 14, using it almost daily.

Attending State College of Florida, working towards a major in marketing, Anthony continues to pursue a knowledge of angling through the people he meets and personal experiences. Feel free to ask Anthony on anything related to his passion of the sport! 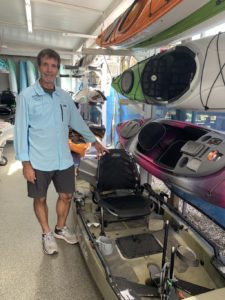 David Robinson is a 3rd generation Sarasota native who has been fishing the local waters since his childhood.  His interest in protecting our waters started early with a father who worked with the Florida Marine Patrol, now known as FWC.  David continues to involve himself in efforts to protect our natural resources.

David’s kayak of choice is the Hobie Pro Angler 14.  His interest in kayak fishing started as a way to explore areas where others were unable to reach.  Fishing the Hobie Pro Angler 14, David has fished remote areas along Florida’s west coast and the lakes of central Florida.  With his love for both fresh and salt water fishing one of David’s favorite places to fish is the Charlotte Harbor area, usually targeting snook.

After owning his own Pro Angler 14 for many years, David’s interest in kayak fishing has also turned into an interest in kayak repairs.  Any questions about fishing, kayaks or repairs, come in and talk to our team member David.